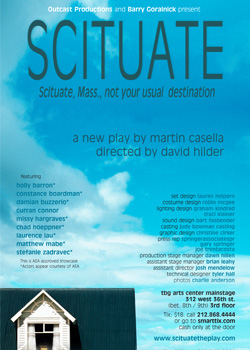 "A tender, emotional play. Stewart's emotional journey rings piercingly true, and anyone who's lost a loved one will find much resonance here. Casella reminds us that death is a tragedy most of all for those left behind; and that even though moving on seems impossible, it's finally all that is possible. Chad Hoeppner is outstanding as Stewart, creating a fully-realized character in this young man whose guilt and relief and fear have combined to render him nearly immobile. His Stewart never wallows and he always feels so vitally alive that his inability to rejoin the world is especially painful and moving. Laurence Lau offers one of the evening's other strong performances. Damian Buzzerio and Holly Barron are very effective as Stewart's parents; I loved the chemistry that they share with Hoeppner, creating a convincingly real and loving family. David Hilder's staging is excellent. The set by Lauren Helpern is appropriate and charming, and the sound design by Bart Fasbender is invaluable. All in all, this is an effective drama about love and loss, which are subjects that Casella explores with maturity and insight."
—Martin Denton, NYTheatre.Com 04/01/2007

A surprisingly active and charmingly funny guide though the world of loss. Hoeppner and Mabe bring their love story to life so vividly that it's no wonder Stewart won't budge. Casella provides the cast with great moments of comedic bickering. Clever directing by David Hilder and seamless lighting. Look to SCITUATE for a comforting and amusing story about dealing with loss and sharing love with friends, families and romantic partners."
—Alison Rohrs, offoffonline.com 03/30/2007

"Heartfelt. Casella effectively demonstrates the highs and lows of the couple's complicated relationship. He makes a great case for the importance of good friends and supportive parents, and does a fine job in drawing interesting relationships among all these disparate characters. Hilder gets good work from the cast. Lau brings real warmth to Greeber. Zadravec gets her laughs as his cranky wife. Hargraves is touching and funny. Ultimately, SCITUATE gains its greatest strength from Hoeppner. Handsome - and more important, intensely likeable - Hoeppner makes Stewart someone you'd want to climb into bed with, no matter what the circumstances. Indeed, if the bed was bigger, I have no doubt some audience members would be tempted to leave their seats and get under the covers with him."
—Brian Scott Lipton, theatermania.com 03/29/2007

Casella's dialogue is emotionally articulate and often snappy. Casella grounds Stewart's visions in a naturalistic, everyday setting, and the able cast does its part to maintain the illusion of realism. A.J. Mell, Back Stage 03/28/2007 "Three and a half stars. This wonderfully acted play carefully takes you to that place where you are reminded of people you have lost in your life and allows you to muse over what that person meant to you - which can be difficult and wonderful at the same time. There is an honesty here that makes this a special night at the theater."
—David Bell, Show ShowDown 04/01/2007

"Delicate, engaging and heartfelt. Casella has written a series of characters unusually well-developed for a 90-minute play, and what is striking is that ultimately the play is not so much about death as it is about life. The jagged-edged relationships that have neither rules nor proscribed roles, play out around Stewies bed, and Casella posits that even the imperfect, and sometimes downright messy, nature of contemporary relationships have not inured us to the need for closeness and love. Stewies grief is no less real because his relationship with Robbie wasnt perfect, and the play takes on a particular richness because of the struggle to love when its not always easy. David Hilder has directed the play with a gentle, affectionate touch, balancing the distinct nature of all of the relationships in the play and the performances have an effortless naturalism. The cast is uniformly exceptional. Chad Hoeppner in particular as Stewart is remarkable. He is onstage throughout, and he has a remarkable and compelling quality of innocence and honesty beautifully underplaying the grief and finding the perfect notes for the lighter moments. Constance Boardman is terrific as the psychologist, Peach, who helps Stewart experience the range of his emotions. Damian Buzzerio and Holly Barron are lovely as Stewarts parents. Matthew Mabe is fine as Robbie. Curran Connor, Missy Hargraves, Laurence Lau and Stefanie Zadravec are excellent as Stewarts friends. Lau especially has some wonderfully subtle moments as Stewies straight lawyer friend who flatters himself that hes attractive to men. The fine, diminutive set is by Lauren Helpren, and Graham Kindred and Traci Klainer did the excellent lighting. Sound design, an important element of the play, is by Bart Fasbender. What Casella ultimately suggests is that the process of grief is uniquely our own. If were healthy, the heart will have its time, and while we may never be whole again, one hopes that even without supernatural intervention, we can go on."
—Christopher Byrne, American Theater Web 04/03/2007

If I had only one word to describe Martin Casella's play, about a man who copes with the death of his lover by not getting out of bed, it would be "heartfelt". It has the cherishable feeling of something lived-through that's been tenderly delivered to us. Although most everyone who has experienced a profound loss will be able to identify with Stewart (Chad Hoeppner - a sensitive, finely modulated performance) and his need to immobilize, the play is accessible to anyone who has had to draw strength from the loving support of friends and family. Two stand-out performances in the supporting cast: Laurence Lau and Stefanie Zadravec, who bring an abundance of warmth and humor to the proceedings as married friends of Stewart's.
—Patrick Lee, Show Showdown 04/01/2007

Martin Casella, who scored a major hit at the 2005 Fringe Festival with THE IRISH CURSE, has another winner in SCITUATE. Casella wants to explore the definition of grief and what constitutes its makeup. Can it be finite in terms of time and content? Must it also take into consideration the grief of others? They are not really new questions yet he has crafted a moving consideration of the problems surrounding loss. Chad Hoeppner as Stewart and Matthew Mabe as Robbie do very well in walking the fine line between being emotionally complex without alienating. Scenes of heartrending emotion. David Hilder's direction is clean and self-effacing. SCITUATE is solid theater and Casella a playwright to watch.
—Van Loan, nyconstage.org 03/31/2007

A game cast, headed by the hard-working and genial Chad Hoeppner as Stewie who is on stage almost the entire play, skillfully conveys the emotional complexities of the story. Particularly subtle work is on view from Laurence Lau as a straight hottie husband with a sexual peccadillo in his past, and Damian Buzzerio as Stewie's father, an Italian union chieftain whose rough edges don't blunt his deep love for his distraught son. This warm-hearted mediation on the grieving process treads some sadly all-too familiar ground about coming to terms with lives only half lived and the re-evaluations that occur after a loved one is no longer present to mediate the multiple relationships that make up a life. But as Stewie attempts to let go of a romanticized if not sanitized version of his partner while integrating his memories of a flawed but loveable man, the play takes on additional resonance. The three straight couples comment on and try to understand the nature of this homosexual marriage and in doing so compare it, sometimes accurately, sometimes not, to their own couplings. The play's most vitalizing insight is that in death, as well as in life, gay marriage is striking similar and at the same time significantly different than heterosexual partnerships. And while it's hard to imagine more accepting parents or relaxed and loving friends than Stewie's, the ghost of homophobia is the real specter that (still) haunts this play and our world."
—Christopher Murray, Gay City News 04/05/2007